To reuse our scenario from our previous example, let’s imagine that we have a subscription-based web site that sends inspirational text messages to people’s phones each morning.

Scenario #1: Monolithic web application (aka Another Big Ball of Mud™).

We have a web application that handles everything from sign-up (ignoring for now where and how our data are stored) through to billing and the actual sending of text messages. That’s not so great in general, but let’s have a look at a few simple rules:

Business is great. (It really is amazing what people will pay for, isn’t it?) Actually… business is so great that we need to start scaling ourselves out. As we said before, let’s ignore the bit about where we store our data and assume that there’s just a repository somewhere that isn’t anywhere near struggling yet. Unfortunately, our web-server-that-does-all-the-things is starting to chug quite a bit and we’re getting a bit worried that we won’t see out the month before it falls over.

But hey, it’s only a web server, right? And we know about web farms, don’t we? Web servers are easy!

We provision another one… 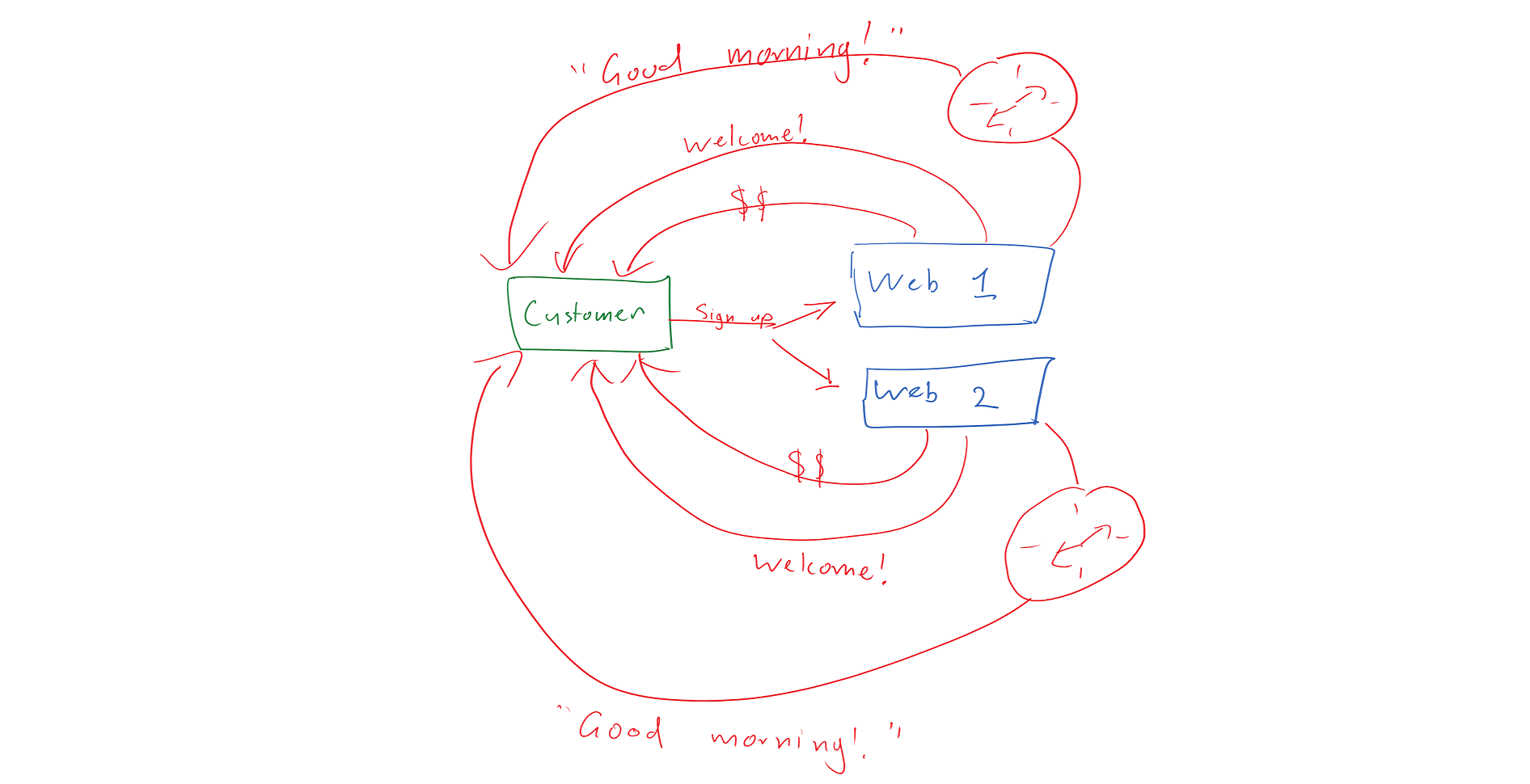 … and things start to go just a little bit wrong.

Our sign-up still works fine - the customer will hit either one web server or the other - and our welcome message and initial invoice get generated perfectly happily, too. Unfortunately, every morning, our customer is now going to receive two messages: one from each web server. This is irritating for them and potentially quite expensive for us - we’ve just doubled our SMS delivery costs. If we were to add a third (or tenth) web server then we’d end up sending our customer three (or ten) texts per morning. This is going to get old really quickly.

The obvious mistake here is that our web servers are responsible for way more than they should be. Web servers should… well… serve web pages. Let’s re-work our architecture to something sensible.

We’re getting there. This doesn’t look half-bad except that we’ve now simply moved our problem of scaling to one layer down. We can have as many web servers as we want, now, but as soon as we start scaling out our app servers we run into the same problem as in Scenario #2.

Our next step is to separate some responsibilities onto different servers. Let’s have a look at what that might look like:

This looks pretty good. We’ve split the load away from our app server onto a couple of different servers that have their own responsibilities.

This is the first example that’s actually worth writing some sample code for. Our code in this scenario could look something like this in our sign-up logic:

and with these two handlers for the CustomerSignedUpEvent:

We’re actually in pretty good shape here. But business is, by now, booming, and we’re generating more invoices than our single invoicer can handle. So we scale it out…

Our customers are not happy.

Here’s where we introduce Nimbus’ concept of a competing event handler. In this example:

we implement the IHandleMulticastEvent<> interface. This means that every instance of our handler will receive a copy of the message. That’s great for updating read models, caches and so on, but not so great for taking further action based on events.

Thankfully, there’s a simple solution. In this case we want to use a competing event handler, like so:

By telling Nimbus that we only want a single instance of each type of service to receive this event, we can ensure that our customers will only receive one invoice no matter much much we scale out.

A key concept to grasp here is that a single instance of each service type will receive the message. In other words:

So there we go. We now have a loosely-coupled system that we can scale out massively on demand, without worrying about concurrency issues.

This is awesome! But how do we send our inspirational messages every morning?

Sneak peek: have a look at the SendAt(…) method on IBus. We’ll cover that in another article shortly.

I'm also a co-founder at Stack Mechanics, one of the organisers of the DDD Brisbane conference and, in my spare time (ha!), I also run my own photography business, Ivory Digital.

I have a number of small open-source creations, including Nimbus, ConfigInjector and NotDeadYet, and am an occasional contributor to several more.

I'm a regular speaker and presenter at conferences and training events. My mother wrote COBOL on punch cards and I've been coding in one form or another since I was five years old.